Closing out my week off from work this weekend, I had a solo WWII game today using the modern era rules from Joseph Morschauser's How to Play Wargames in Miniature. Despite their simplicity (or perhaps because of it) they gave an excellent game. The simplicity of the mechanics allowed for calculation of maneuvers in an almost chess-like manner. While not to everyone's taste, I rather enjoy that type of calculation.

I threw in a few simple house rules for wrecked vehicles – other vehicles can't move through them and they block LOS/LOF. I also tossed in some restrictions for overrun attacks (called "running down" in the rules). I decided overruns could only take place if the target infantry was in open terrain or on a road, and only if the overrunning vehicle's entire move took place in open terrain and/or road, and only if the overrunning vehicle could cross the target infantry base completely without contacting any other enemy units (the latter allowing for defense in depth). 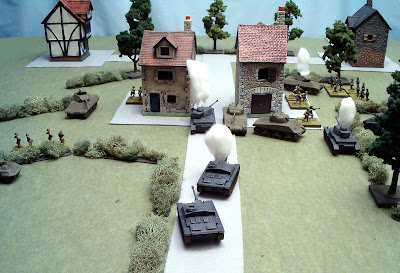 Middle of the battle. Plumes of smoke (I know they should be black, not white) rise from wrecked vehicles, blocking LOS. The German infantry at top left take advantage of the house rule prohibiting overruns vs. infantry deployed in depth.

The game moved quickly and smoothly and was extremely entertaining. I set up a plain old meeting engagement, with symmetrical forces – nine rifle squads, four tanks, and one scout car on each side. The Germans got the first move, but the Americans had choice of table edge. Consequently, the Americans made it to the large town near the center of the table before their opponents. First contact occurred at the edge of town, when a Sherman survived a shot from a Pz IV, then destroyed the German tank in the following American turn. 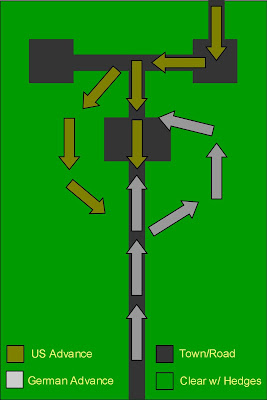 Overall course of the battle.

Except for a couple of tanks on each side that pushed straight up the middle, the battle took on a classic "hurricane" pattern, with the weight of each side's advance on its own right flank, hitting the enemy left. Each army, on its respective strong side, pushed back the enemy, but the Americans got the better of it, dropping the German force to less than 50% strength before the Germans were able to do the same to them.

I'm looking forward to playing some more with Morschauser's rules.
Posted by Chris C. at 6:24 PM

Two Up, One Back

"The dominant (though not the only) tactical formation for the infantry in both attack and defense remained 'two up, one back.' This was a product of the triangular organization that the infantry used from platoon to division level. Triangular units had three main 'maneuver' elements (weapons units did not count as 'maneuver' elements). Rifle platoons had three squads; rifle companies three rifle platoons; battalions, three rifle companies; and so forth. This encouraged commanders to place two of their maneuver units forward while keeping back the third so that it could relieve or reinforce a frontline unit."